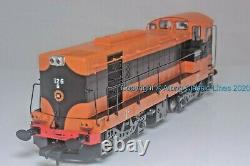 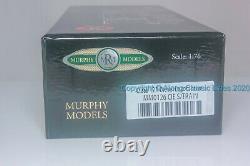 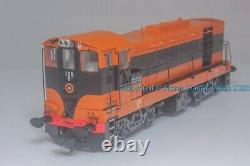 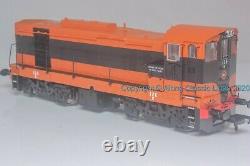 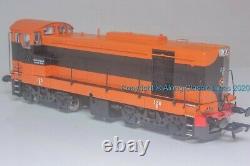 Murphy Models MM0126, OO Gauge, GM EMD Class 121 Bo-Bo Diesel Locomotive, number 126 in CIE Super Train orange with black livery with CIE branding. The 121 Class locomotives were manufactured from December 1960 to January 1961 and numbered B121 to B135 inclusive. From the early 1970s onwards several locomotives of this class dropped the "B" prefix from their fleet number when re-liveried. The last two locomotives that survived in traffic (124 and B134) were both withdrawn from service on 3 May 2008. Prior to 1961, almost all Irish diesel locomotives were built in Great Britain, but from the 1960s onwards, GM became the sole supplier of locomotives to CIÉ, which eventually also extended to Northern Ireland Railways locomotives at a later stage.

These were EMD's first ever fully American-built locomotives delivered to Europe. The Class 121 locomotives were a typical American-style single cab road switcher'.

The layout of the cab was quite different from the other conventional CIÉ diesel models of the time, with the controls to the side of the driver, rather than the front. Due to apparent driver complaints of reduced visibility when operating with cab trailing, it was ultimately decided that these locomotives should only operate in a cab-leading formation. Later conversion for multiple-unit working allowed two 121 class locomotives to be coupled hood-end to hood-end, removing the need to turn them around for their return journey. Although originally fitted with an EMD 8-567CR engine of 960 horsepower (720 kW), all were later fitted with 645 type "power packs" (piston & liner assemblies) for parts standardisation, while at the same time keeping their original power output for reliability reasons.

All but three (B121, B125, and B135) were fitted with Train Door Control equipment for operation with the Inchicore-built, BR Mark 3 based, Push-Pull train units. The push-pull equipment of locomotive B132 was subsequently decommissioned. Entering service in 1989, these trains, consisting of a single 121 Class and up to six carriages, were mainly used on the Dublin northern suburban passenger railway service. The Limerick shuttle continued to be worked by 121s for several years after this date. B126 on trial at Nesbitt Junction, near Enfield, County Meath on 24 February 1961.

The first member of the class to be withdrawn was 125 in 1986 following an electrical fire, though it had been extensively damaged in an accident twelve years previously. However it was not scrapped until 2002. By 1995, the class 201 had replaced the class 121 on most passenger routes.

Throughout the late 1990s the fleet dwindled, and by 2005 only numbers 124 and B134 remained in service, with number 123 in storage for five years until eventually being scrapped in 2008. Their last official scheduled mainline passenger working was on 9 July 2005 on the Sligo line. The last known passenger working of this class was the 13:15 Waterford-Heuston service on 18 January 2007.

Previously, these locomotives had filled in on the Manulla-Ballina service or the occasional service from Limerick. The very last use of them in public service was in the early months of 2008 on maintenance trains - by this stage 124 and B134 were the only survivors. Both were retired by degrees and officially withdrawn in July 2008, though at this stage neither had done much for many weeks. 134, preserved by the RPSI, At Dublin Connolly. The Irish Traction Group has preserved locomotive 124. It is located at Moyasta Junction on the preserved West Clare Railway.

The other surviving member of the class, locomotive B134, is owned by the Railway Preservation Society of Ireland (RPSI), and is undergoing restoration. On 19 July 2016 it was hauled by 071 Class locomotive 071 from Inchicore to the RPSI's locomotive shed at Dublin Connolly. The cab of locomotive 133 is preserved at the Cavan & Leitrim Railway in Dromod, County Leitrim.

Along classic Lines is an online Model Railway retailer, Our E bay shop sells Model Railways old and new in a range of gauges and outlines. From the menu on the left select the gauge you are interested in and explore our range, we are friendly and approachable and are happy to answer your questions. The item "Murphy Models MM0126, OO Gauge, Class 121 Bo-Bo Diesel loco, 126 CIE/Super Train" is in sale since Saturday, December 12, 2020. This item is in the category "Collectables\Model Railways & Trains\OO Gauge\Locomotives". The seller is "alongclassiclines" and is located in Manchester.