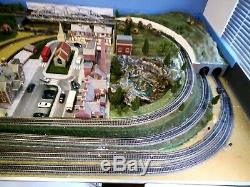 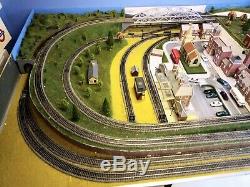 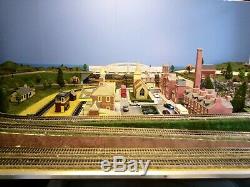 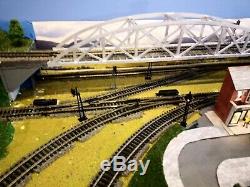 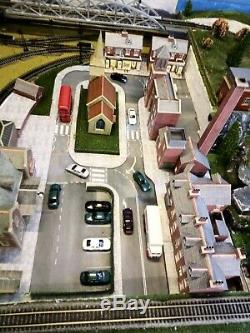 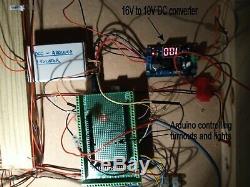 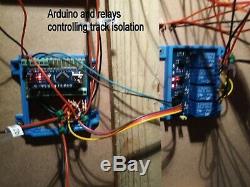 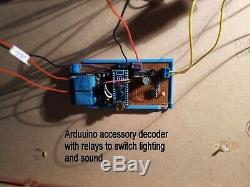 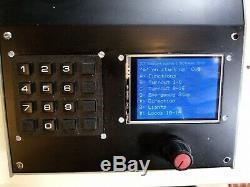 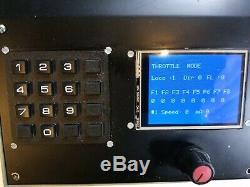 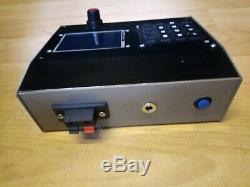 An OO gauge track layout consisting of outer loop with passing section and an inner 2 loop spiral with. All curves are radius 2 or 3.

Diorama consists of town buildings and station with elevated countryside scenery and bridge. It has been run as a DCC control layout but could of course be wired and connected to analogue DC. Controllers if you don't want to use the existing home built electronics.

The turnouts and signal lights are controlled by a home made Arduino based accessory decoder with. CV addresses of 29,30,31, and 32. The buildings have lighting and the church, station and factory have MP3 player Arduino based ambient sound. Modules which can be turned on/off with accessory CV commands of 27 and 28 respectively.

The outer loop has a short section of track at the rear near the bridge that can be isolated. Small magnet on underside activates a reed relay under the track shortly after the section which then. Under Arduino control isolates the section preventing any following locomotive proceeding.

Locomotive is only released when original locomotive passes over another reed relay on opposite side. Similarly there is an isolation section on the inner loop bridge which is activated after a train passes. And is then released when the first train enters the tunnel on the downside of the incline. Locomotives can be run on each loop at the same time with minimal risk of collision so long as speeds.

Frankly the underside wiring is untidy but I will provide some wiring descriptions and the software. Arduino sketches that are used on the layout. Obviously some familiarity with Arduino microprocessor. Use and DCC control would be a great advantage to a user.

The included DCC controller is a home built unit based on an internet design. And wiring for the box. I will also provide some small magnets that I use on underside of locomotive to.

The layout is far from exhibition standard but would be a quick fun economical entry for a new user. Are very temperamental in changing direction despite being driven by a CDU module.

One is particularly temperamental and I will include a spare if you want to change it. The track is clean and has been in regular recent use. The only known problem is that tunnel entry/exit widths are a little narrow and can interfere with long items. On a turn if scenery has moved out of position slightly. The scenery is semi modular, the left and right hand hill sections can be lifted out if the appropriate elevated.

The central buildings and roads are also built on a separate sheet and can be lifted out with care and. Difficulty, some underside power wiring for the buildings would need disconnecting from a terminal block first. It is large and requires transporting essentially flat. The item "OO Gauge model train layout" is in sale since Saturday, July 11, 2020.

This item is in the category "Collectables\Model Railways & Trains\OO Gauge\Landscape Layouts, Track Plans & Dioramas". The seller is "flyingalan" and is located in Aylesbury. This item can't be shipped, the buyer must pick up the item.